Wilsonia pusilla
Passeriformes
Members of this diverse group make up more than half of the bird species worldwide. Most are small. However their brains are relatively large and their learning abilities are greater than those of most other birds. Passerine birds are divided into two suborders, the suboscines and the oscines. Oscines are capable of more complex song, and are considered the true songbirds. In Washington, the tyrant flycatchers are the only suboscines; the remaining 27 families are oscines.
Parulidae
This large group of small, brightly colored songbirds is a favorite of many birdwatchers. Wood-warblers, usually called “warblers” for short by Americans, are strictly a New World family. Most of the North American members of this group are migratory, returning in the winter to the tropics where the family originated. Warblers that nest in the understory tend to have pink legs and feet, while those that inhabit the treetops usually have black legs and feet. North American males are typically brightly colored, many with patches of yellow. Most North American warblers do not molt into a drab fall/winter plumage; the challenge posed to those trying to identify warblers in the fall results from looking at mostly juvenile birds. Their songs are generally dry, unmusical, often complex whistles (“warbles”). Warblers that live high in the treetops generally have higher-pitched songs than those that live in the understory. Warblers eat insects gleaned from foliage or captured in the air. Many supplement their insect diet with some seeds and fruit, primarily in fall and winter, and some also eat nectar. Most are monogamous. The female usually builds the nest and incubates four to five eggs for up to two weeks. Both members of the pair feed the young.
Common summer west. Fairly common east.
Source of Bird Audio

Wilson's Warblers are small, bright yellow birds marked with black. They are bright yellow below, and olive-yellow above. Males have distinctive black caps on top of their heads, and both sexes have large, black eyes that stand out against the bright yellow on their faces. Females and immatures have duller, dark caps. The western Washington breeding race females have dark black caps.

Wilson's Warblers breed in wet, shrubby areas within forests. In Washington, they are most often found in small breaks in the forest that have dense, moist, shrubby cover, especially willow and alder thickets. These areas can be natural clearings, wetland edges, avalanche chutes, clear-cuts, or stream corridors. During migration and winter, they use similar habitats.

Wilson's Warblers are mostly solitary outside the breeding season, but associate with mixed flocks while foraging. They typically glean prey from leaf and twig surfaces, but also catch aerial prey. They forage fairly low, but rarely on the ground, and are very active, hopping from branch to branch. Wilson's Warblers have a characteristic tail wave or flip. This active hopping, combined with the tail flip, may help with identification.

Wilson's Warblers are primarily monogamous, although some are polygynous, and high rates of extra-pair copulations have been observed. Pacific Lowland populations lay fewer eggs, raise fewer young, and have higher rates of monogamy than populations in the mountains. Lowland populations nest in shrubs, unlike their ground-nesting highland relatives. The female selects the nest site, either sunken in a patch of moss or sedge, or in a low shrub or vine. She builds a bulky open cup of leaves, grass, and moss, lined with grass and hair. The female incubates 2 to 7 eggs for 11 to 13 days, and broods the young for the first few days after they hatch. Both parents feed the young, which leave the nest 9 to 11 days after hatching. The parents continue to feed the young for up to 25 days after they fledge.

Wilson's Warblers are Neotropical migrants that winter in the mountains of Mexico and Central America, although small numbers remain in the extreme southern U.S. They migrate at night, alone or in small groups, sometimes mixed with other species.

Two subspecies of Wilson's Warbler breed in Washington: the Pacific Lowland subspecies breeds in western Washington, and the Rocky Mountain subspecies breeds in the northeast corner and the Blue Mountains. Wilson's Warblers are one of the most common breeding warblers in western Washington, and can be found from April to mid-September, with smaller numbers lingering through the end of September. They are less common in eastern Washington, where they are found from May to early August in middle- to high-elevation forests of the Cascades, the northeast corner, and the Blue Mountains. They are common migrants in the lowland forests on the eastern slopes of the Cascades, and in appropriate habitats down to the Columbia Basin in smaller numbers. 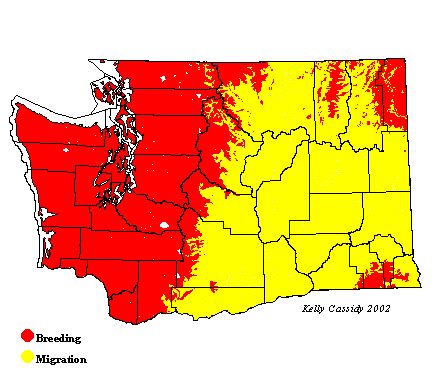