Tyrannus verticalis
Passeriformes
Members of this diverse group make up more than half of the bird species worldwide. Most are small. However their brains are relatively large and their learning abilities are greater than those of most other birds. Passerine birds are divided into two suborders, the suboscines and the oscines. Oscines are capable of more complex song, and are considered the true songbirds. In Washington, the tyrant flycatchers are the only suboscines; the remaining 27 families are oscines.
Tyrannidae
Unlike most passerines found in North America, flycatchers are suboscines. Suboscines have a simpler syrinx (voice box) than the oscines (songbirds), and hence have less-developed and less-elaborate songs. Their song is innate, and does not contain a learned component. The flycatchers are the only suboscine passerines found in North America north of Mexico. Nearly all suboscines (and all Tyrannidae) are native to the New World, and they are much more numerous in the tropics, where several other families occur in addition to the Tyrannidae. Flycatchers are named for their foraging style. They sit quietly on a perch and dart out to grab a flying insect from the air, and then return to their perch to wait for the next meal to fly by. Many also forage by hovering next to foliage or over the ground. Most have a distinct, upright posture and a slight crest. They have small feet as they do not typically walk or run on the ground. Most flycatchers are monogamous. The female generally builds the nest, incubates the eggs, and broods the young, although both parents feed the young. Flycatchers of the genus Empidonax pose many identification challenges for birders. Range, habitat, vocalizations, and behavior must all be taken into account to distinguish between members of this group.
Common summer east. Rare west.
Source of Bird Audio

Except for the Tropical Kingbird (a rare visitor in fall), the Western Kingbird is the largest flycatcher in Washington. It is light gray-green above with darker wings and a black tail with white outer edges. Its breast is light gray, and its belly and underwings are bright yellow. It has red feathers in its crown that can be seen only when it displays.

Western Kingbirds inhabit open areas with scattered trees or utility poles for nesting. They are especially common around ranch buildings and corrals where perches are plentiful.

Aggressive and conspicuous, Western Kingbirds can easily be found perching on fence wires all over eastern Washington. They wait on these perches and then make quick flights out to grab prey from the air or off the ground. They commonly hover over a field and then drop to the ground after prey.

Insects, both flying and crawling, make up the majority of the Western Kingbird's diet. The birds also eat small berries and other fruit.

In Washington, Western Kingbirds usually nest in a Ponderosa pine or on a utility pole next to a transformer. They also nest on building ledges, in sheds, or in other birds' nests. Unlike Eastern Kingbirds, they do not need water nearby to nest. Monogamous pairs are formed after the male performs an elaborate display flight, twisting and flipping through the air. The female builds a cup of grass, weeds, twigs, and plant fibers, and lines it with feathers, plant down, and hair. She incubates three to four eggs for about two weeks. Both parents feed the young, which leave the nest at 16 to 17 days. The parents continue to feed the young for another two to three weeks.

Western Kingbirds usually arrive in Washington in late April or early May. They leave for southern Mexico and Central America in August, traveling alone or in small flocks.

Western Kingbirds are more widespread across eastern Washington than Eastern Kingbirds because, unlike Eastern Kingbirds, they are not restricted to areas near water. They have adjusted well to increased development in their breeding habitat, making use of man-made structures for perching and nesting. During the 20th Century, they expanded their range eastward and have increased in number across much of their range, including Washington. At one time they were more common in western Washington, but numbers have declined as the prairie habitat has disappeared. Pesticides are a concern across much of their range and have been detected in the blood of many Western Kingbirds. However there have been no signs of eggshell thinning. The Breeding Bird Survey shows a small, not statistically significant decline in Washington between 1980 and 2002.

Western Kingbirds are common from May to August in the open lowlands of eastern Washington, especially in farmland. In western Washington, they are rare breeders, with breeding confirmed in Pierce, Skagit, and Whatcom Counties. Migrants can also be seen rarely throughout western Washington including the outer coast during the spring and fall. 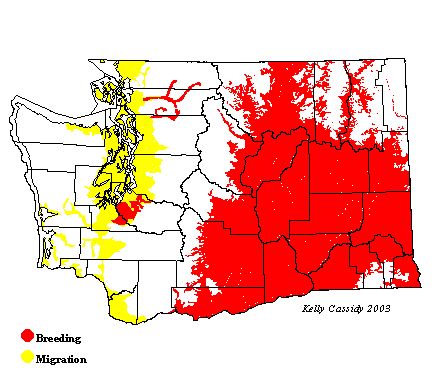